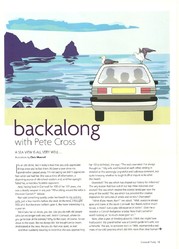 It’s an old cliché, but it really is true that you only appreciate things once you’ve lost them. It’s been a year since my grandmother passed away. I’m not saying we didn’t appreciate Nan when we had her. She was a mine of information, a disarming source of old school wisdom, and, until her eyesight failed her, a merciless scrabble opponent. And, having been born in Cornwall and living here for 100 of her 101 years, she was a deadly weapon in any pub “Who sitting around the table is the most Cornish?” debate.

Nan said something quietly under her breath to my wife and I, just a few months before she died. At the time I thought little of it. But the more I reflect upon it, the more interesting I’m realising it is, a year on.

We’d take her on drives you see. Like you do with old people who can no longer walk very well. And in Cornwall, where do you go to look at the scenery? Why, to the coast, of course. So we drove to the coast, like we always did. We bought an ice cream. And looked at the view, like you do. Nan was quiet, as ever.

And then suddenly (bearing in mind that she was approaching her 101st birthday), she says “The sea’s overrated. I’ve always thought so”. My wife and I looked at each other, smiling in disbelief at this seemingly ungrateful and odd comment, not quite knowing whether to laugh it off or enquire as to what she meant. Overrated? What did she mean? The sea that has shaped our history for millennia? The very reason that two out of our top three industries ever existed? The sea that created the coastal landscape that has become the envy of the world? The sea that has provided the creative inspiration for centuries of artists and writers? Overrated?

“Well, everyone always goes and stares at the sea in Cornwall. But there’s nothin' much to see is there? Just a grey old expanse of nothin'. Give me a wood or a Cornish hedgerow anyday. Now that’s somethin' worth looking at. So much more goin' on.”

Now, after a year of thinking about it, I think she might have had a point. My grandmother was a Cornish gardener’s wife, not a fishwife. The sea, to someone born in 1906, represented a vast mass of icy cold greyness which did little more than steal human lives and extend the distance between us and our loved ones who’d gone away to fight wars on our behalf. It was infinitely less understood then. It was a place which gave us fish, and seaweed for the garden, and little else. In the early 1900s you could swim in the sea, if you could stand the cold, but there were no wetsuits, no surfboards, none of the paraphernalia we now take for granted to help us unlock it all.

Sure, a fledgling tourist industry was developing in the early 1900s, and the beach was becoming a more popular place to be in the summer. But it’s easy to see why a wood was more enticing for a little girl all those years ago. It was there all year round. It was a haven to play in, with its boundless and fascinating flora and fauna, its trees to climb and birds' nests to find. It changed constantly with the seasons. It was atmospheric, exhilarating, endlessly interesting, accessible.

Nan’s life was hard enough. Why would she want to make it harder by wasting time going to a place that is only really comfortable for a handful of days per year? If you think about it, no-one in their right mind used to build their house with a sea view. A sea view was the last thing you wanted, because with it came howling winds and rattling windows. Constant immersion in salt spray put paid to all but the toughest plants, and rotted wood. A nice sheltered valley, that was the thing. It’s only in our comfy, all-mod-cons modern world that we can call a sea view desirable, let alone pay more money for the privilege of having one.

By the time her 101st birthday came round, Nan wasn’t up for a big celebration of the type we’d had for her 100th. So we took her for a drive. It was a lovely August day, and we remembered what she’d said. So we headed away from the coast, and explored all the beautiful, sun-dappled, leafy lanes around where she grew up in Summercourt. She couldn’t see it too well, but what she saw, she loved. She couldn’t get enough of it. In the circumstances, it was the perfect 101st birthday. She never stopped talking about it, not until the day she died. We were so glad she’d been honest with us.

It can be good to look at something in a different light. Sometimes we just can’t see the woods for the trees. Or, in this case, the sea. 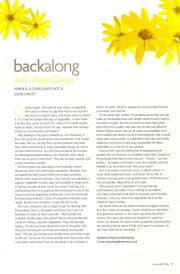 October again. This time of year there’s a vegetable that starts to show its ugly little face in our autumn veg box on a regular basis, and I have come to loathe it. Who in the world would, hand on heart, choose to eat the sad, wizened little monkey brains we call Jerusalem artichokes?

They belong to the genus Helianthus, and therefore, if left in the ground, would grow into a sunflower. That would be lovely. But no, we dig them up and pretend they taste nice. With mud lurking in every impossible-to-get-at crevice of their ludicrous form, you first have to spend twenty minutes scrubbing/peeling/de-knobbing the miserable little tubers. Then you’ve got to cook them. They are horrible roasted, and worse steamed or boiled. All the recipes you read about them basically involve disguising them with preferable ingredients. If you eat them mashed they are apparently best mixed 50/50 with proper potatoes. Which rather begs the question, why not remove them altogether and use potatoes (a superior vegetable in every way, and available in huge sacks in laybys virtually all year round for a fiver)? And yes, I’ve tried grating them in a salad (as recommended in one of the missus’s poncier vegetarian cookbooks), and I’ve tried Hugh Earning-Quids-and-all’s Cream of Jerusalem artichoke soup recipe. By the time I finished, I’d lost the will to live.

Oh, sure, everyone’s got a magic recipe for dealing with the problem that is a Jerusalem artichoke. But I can’t be bothered to listen to them anymore. These people are snobbish foodie-types who reckon they’ve transcended the world of ordinary, popular vegetables. They are basically saying, “If only you knew about this sort of thing like I do.” They are showing off. And they are fooling no-one with their, “Oh yes, you simply must drizzle them with extra virgin truffle oil.” As far as I’m concerned the only thing to do with a Jerusalem artichoke (if you’re not going to let it flower) is feed it to cattle. Which is apparently what sensible farmers in sensible countries do.

It’s the same with nettles. I’m perfectly aware that you can make an acceptable soup with tender nettle shoots in spring. I’ve done it myself. And it’s a comfort to know that when petrol hits £10 a gallon next year and no-one can afford to deliver food to shops, we can all make an acceptable meal from roadkill and objects found in the hedgerow. But I would never claim that a nettle, or a dandelion leaf (also technically edible but not very) is in any way comparable, let alone preferable, to a nice bit of, say, spinach.

Worst of all I get the feeling we’re supposed to be grateful for the existence of Jerusalem artichokes, simply on the grounds that they’re a bit unusual. “Ooooh,” you say at first, “Jerusalem artichokes! A bit like a potato, and not related to an artichoke at all! How very novel!” No! A Jerusalem artichoke is just a rubbish potato. A tuber that’s really hard work, and tastes funny. Not to mention causing quite unacceptable levels of flatulence (or very acceptable, depending on your age).

Why revere such a vegetable? It brings nothing worthwhile to the table. It has nothing to contribute. Let’s take a step back and look at ourselves, and stop this madness. I tell you, these foul vegetables are truly the Emperor’s New Clothes.

No doubt there are Jerusalem artichoke huggers reading this. But I make no apology. I have a feeling my comments may galvanise opinion in the same way they did when I wrote a few years ago about my distaste for opera (or, rather, my distaste for opera lovers arrogantly assuming that we would all adore opera if only we’d give it a chance). So, we’ll see. Feel free to comment.