A BIT OF BACKGROUND

In 1962, most people being born in west Cornwall did so at Redruth hospital. I was in no mood to buck the trend. I grew up in Truro, so spent my childhood in and around Truro, Newquay, Perranporth and the Carrick Roads: skateboarding, surfing, doing a paper round before school and working on farms all summer.

I spent four years at art college (Falmouth School of Art and Bath Academy of Art, Corsham), wangled an honours degree, then took my life in my hands and moved to London in 1985 to start a career in publishing. I travelled whenever I could get away with it, and after fifteen years, at the beginning of the new millenium, finally made it back to Cornwall, wife in tow. 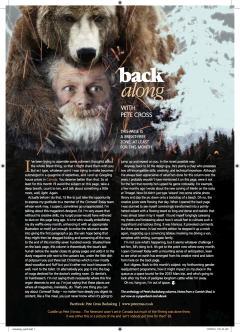 It felt familiar, yet strangely different to the place in which I'd grown up. I started writing things down. A piece in The Times led to regular contributions to Cornwall Today, which became Backalong. The chough returned to Cornwall a year after me, and I immediately got involved with the RSPB's protection programme as a volunteer. This led to my writing Shadows in the Sky, published by Studio Cactus in 2007.

A selection of Backalong columns was published as the anthology Notes from a Cornish Shed in 2013, followed by a second volume, Another Shedload  in 2017.