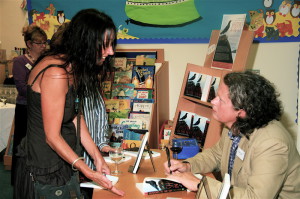 Jenni Close: I suspect the Cornish chough is not a name on everybody’s lips. Where did you find the original inspiration to write Shadows in the Sky?

Pete Cross: It’s funny, I suppose growing up in Cornwall I always assumed they were on everyone’s lips! As far back as I can remember I was always a bit obsessed with the Cornish chough. I can clearly recall being given a season ticket for Newquay Zoo when it opened in 1969, and spending endless hours watching the choughs in the big aviary there. So from the age of seven I always had this awareness that I would never see one in the wild in Cornwall. It might as well have been a dodo as far as I was concerned. It didn’t seem to matter that they still existed elsewhere. When they actually returned in 2001, I was as thrilled as anyone, but the real germ of an idea for Shadows in the Sky developed when I was on holiday in south-west Ireland, seeing the chough population there. I suddenly started thinking about what Cornwall must actually have been like hundreds of years ago when choughs were common. By the time I got home the story was rattling around in my head. I couldn’t wait to start writing!

Jenni Close: Tell me a bit about the writing process. What was it about chough’s story that fired you up? Why did you choose to write it as a work of fiction?

Pete Cross: Well, after seeing those choughs in Ireland, I just thought wouldn’t it be great to weave a story which takes you through three distinct time frames. Starting in 1700 when choughs were relatively common, then jumping to 1900 when everything was looking grim, then to the present day. But even though the three stories are set over 300 years, a particular geographical location holds it all together. Course, with Man playing such an integral role in the real history of the chough in Cornwall, it was easy to give some human characters a supporting role in the story. What I hopefully ended up with was a viable work of fiction but based as closely as possible on well-documented historical facts.

Jenni Close: One of the fascinating aspects about Shadows in the Sky is the way it takes you right in to the lives of the birds. How did you find writing from the chough’s perspective?

Pete Cross: To be honest it was all a bit of an experiment really. I’ve always loved Jack London’s books like White Fang. And I do watch birds a lot. Not rare birds necessarily; I’m just as happy watching a blue tit on a feeder or a gull cruising along a cliff top. So I was wondering if I could write something believable and compelling about my favourite bird. It just seemed so right. The big paradox is making a believable story without anthropomorphising the characters. I really didn’t want to end up writing one of those books where animals behave like humans. So in Shadows in the Sky, the birds’ concerns are always real, you know, as close as possible to what they would be in nature. I’m not a big fan of books that have animals wearing waistcoats and drinking cups of tea!

Jenni Close: The descriptions of the landscape and the Cornish way of life are just fantastic. This is obviously a subject very close to your heart?

Pete Cross: Yep. I live right in the heart of the old tin and copper mining country, and five minutes walk from the coast path. I’m also very proud of my Cornishness, and have a hundred year old grandmother as a useful source too. So I’ve got quite a lot to draw on! Cornwall has changed beyond recognition quite recently, so it was good to talk about the past. I think we’re all fascinated by history. Not in a crusty sort of  “who signed what treaty when” way, but, you know, when you’re in a 300 year old house and you start wondering what life was really like for the people back then. A lot of people don’t realise that 200 years ago Cornwall was right at the heart of the Industrial Revolution. It was incredibly productive, leading the world with mining technology and inventions like the steam engine. There was great prosperity, but obviously this kind of achievement meant that most people were living in miserable poverty. Life was so hard then. Harder than most of us could possibly imagine. And things got even worse by 1900, with the mines starting to close down. I wanted to get something of this across in the book. Without getting ideas above my station, I think the plight of the chough works quite well as a metaphor for the rise and fall of Cornish industry, and Cornwall as a whole. But at the end there is a really positive message.

Jenni Close: One of the things that comes across clearly is the impact – for good or bad – that humans have on the choughs and you write sympathetically but unsentimentally about the hardships for people as well as the choughs. Was it very important for you to bring in that human perspective?

Pete Cross: Well, there’s no denying that humans have had an integral part in the fortunes of the Cornish chough. But I think it’s important to remember not to be too sanctimonious about Man’s failings in the past, just because we live in fairly liberal, enlightened times. If most of us were transported back to the year 1900, and had the life of the boy’s father in the book, I reckon most of us would happily kill a rare bird or steal its eggs if there was a few bob in it. And, interestingly, just as the humans had no idea what their actions were leading to, I try to show how the natural world also has no idea why Man does what he does. Gun shots and gin traps are just another hazard to a rabbit, or a chough. Just a terrifying thing to be avoided.

Jenni Close: You’ve written a book that will appeal to adults as well as children. Was it difficult to strike the right tone?

Pete Cross: Wow, that’s great to hear. If it really does appeal equally to both, then I’ve succeeded. I’d like to think that at the end of the day, it’s simply a good story, with good characters and that it will seduce anyone who reads it, regardless of their age. Hopefully because the narrative is always from the viewpoint of the birds, then it’s this aspect that hooks people. Young or old. The book shows life from the point of view of a bird. It’s pretty risky really, and obviously it runs the risk of being dismissed as nothing more than a book about talking crows. I’d certainly like to think it goes beyond that. It’s different. And if adults and kids both get something from it, then I’m absolutely thrilled.

Jenni Close: Colin Stimpson has provided some stunning illustrations for the book. Was it always the intention to have it illustrated?

Pete Cross: Oh yes. I think illustrations really lift a book like this, helping transport the reader into another world. I’ve known Colin for years, and always had him in mind to illustrate it. His career’s gone pretty stratospheric these days, but he really enjoyed the book, and when we went to see the choughs on the Lizard he was itching to illustrate it. I remember sitting on the cliffs together while he sketched some rough ideas in his sketchbook! After that the whole thing came together beautifully.

Jenni Close: I understand you’re involved with the protection of the chough in Cornwall. Tell me a bit about how that came about and what’s involved.

Pete Cross: Well, I’m just a volunteer with the Cornish Chough Project. They’ve been working for the past five or so years to protect the chough population with habitat management, 24 hour protection for the nesting birds, that sort of thing. They have the most amazing, dedicated team of people working on the project and I love being involved in it. Not quite as much when I’m standing with a torch on a rain lashed cliff top at 2am in March watching for egg collectors, but almost!

Jenni Close: So it’s good news for the chough in Cornwall, is it?

Pete Cross: Definitely. Never in a million years did I think I’d ever see an actual Cornish chough. I thought it would be an oxymoron forever. It’s true that in the scheme of things they’re still an extremely rare bird, but the fact is they are well and truly back. These days if I go out walking on the coast path in what I know to be a choughy area and I don’t see one, I go home disappointed!

Jenni Close: So can people actually go down to Cornwall and see the original of the Stinky Cave?

Pete Cross: Sort of. Before they died out the last few choughs were seen on the north coast of Cornwall, and they returned in 2001 to the south coast. So I used a bit of license there, amalgamating the two locations as the Stinky Cave. But the actual cave where they started nesting on their return in 2001 can be seen down there on the Lizard, and it’s just as I describe it in the book. And right outside it is the pointy rock with the big flat top, all covered with yellow lichen, just as in Shadows in the﻿ Sky. 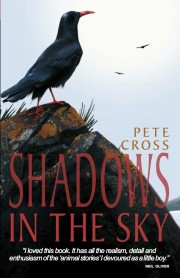